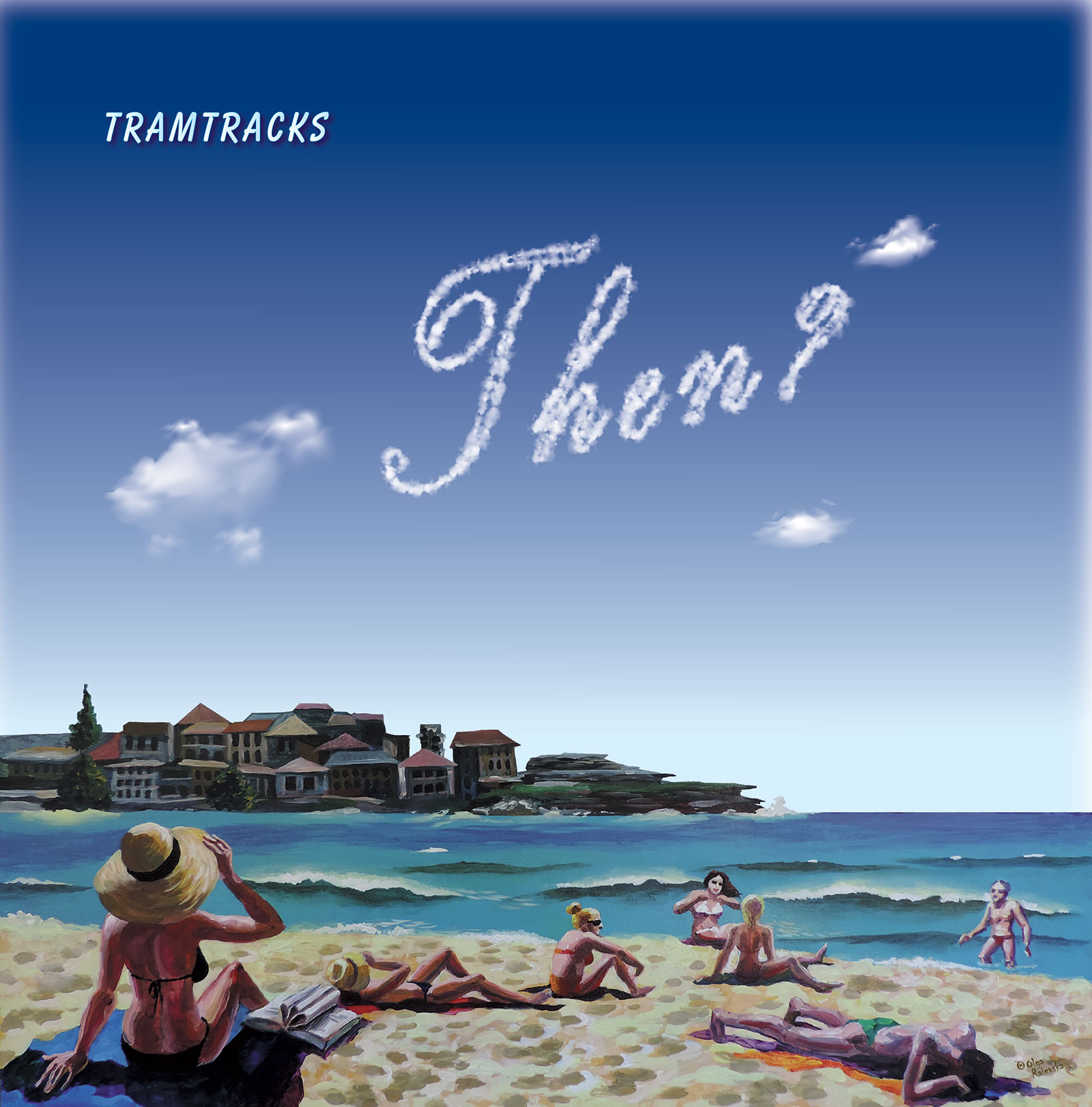 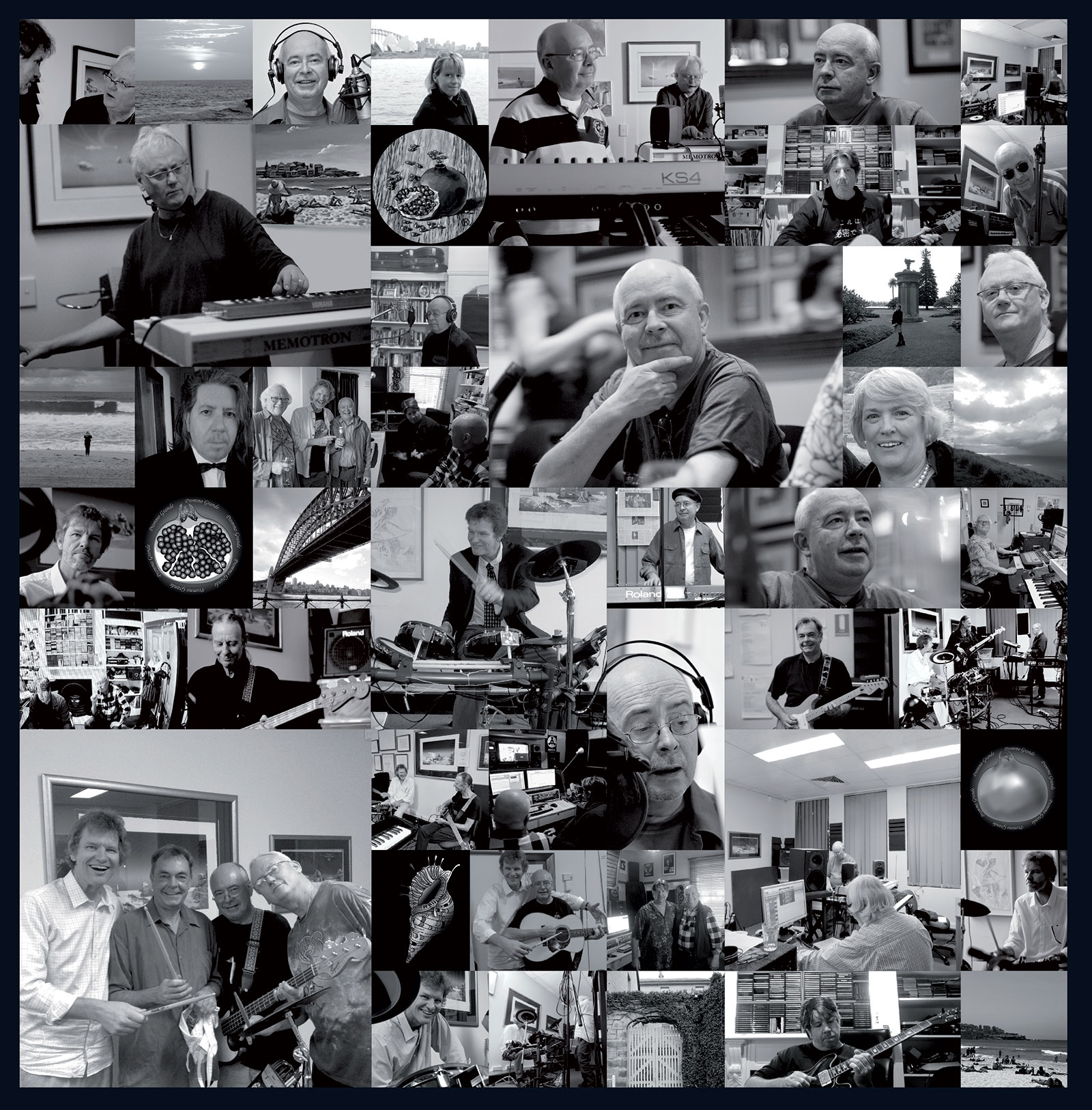 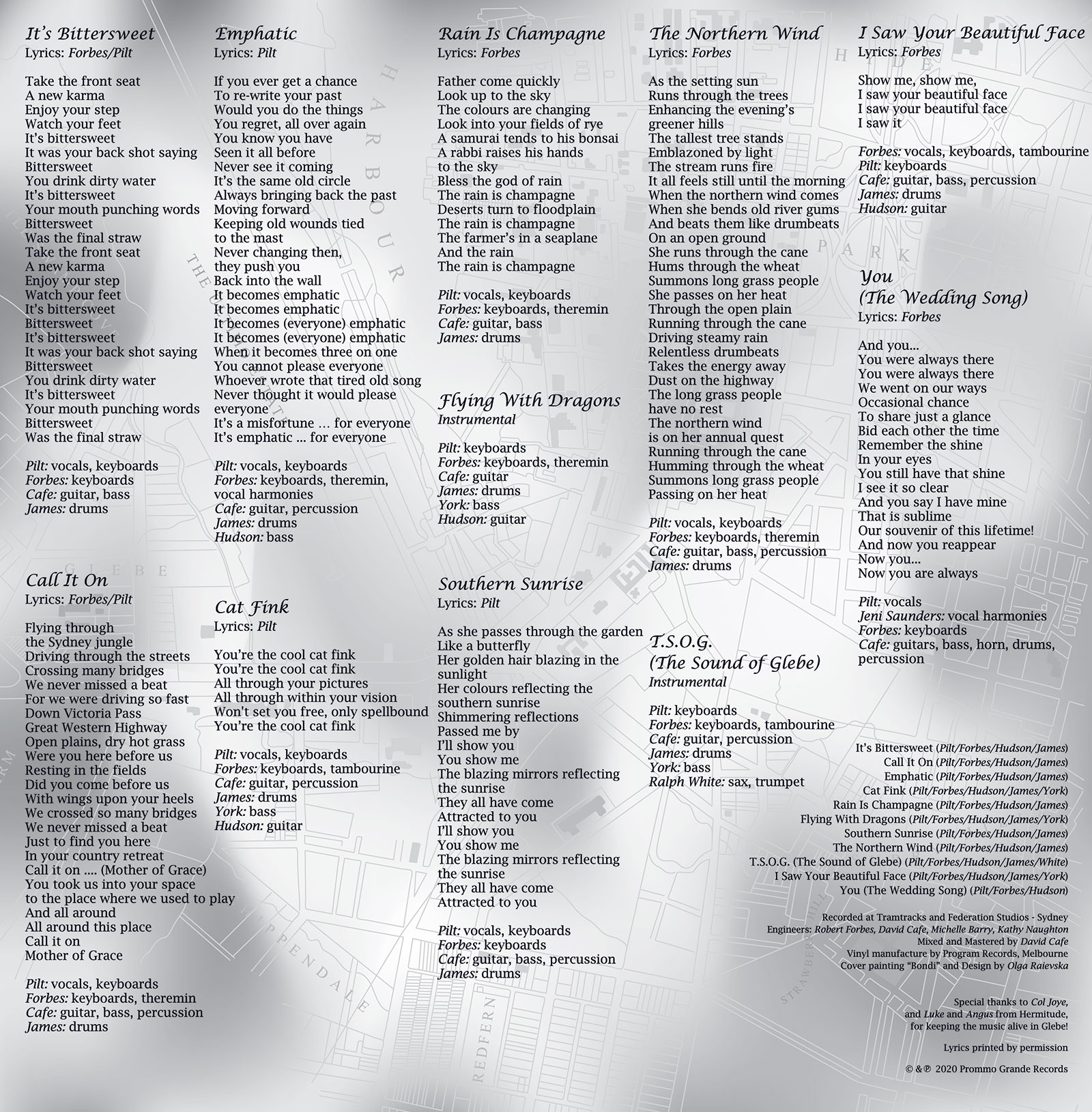 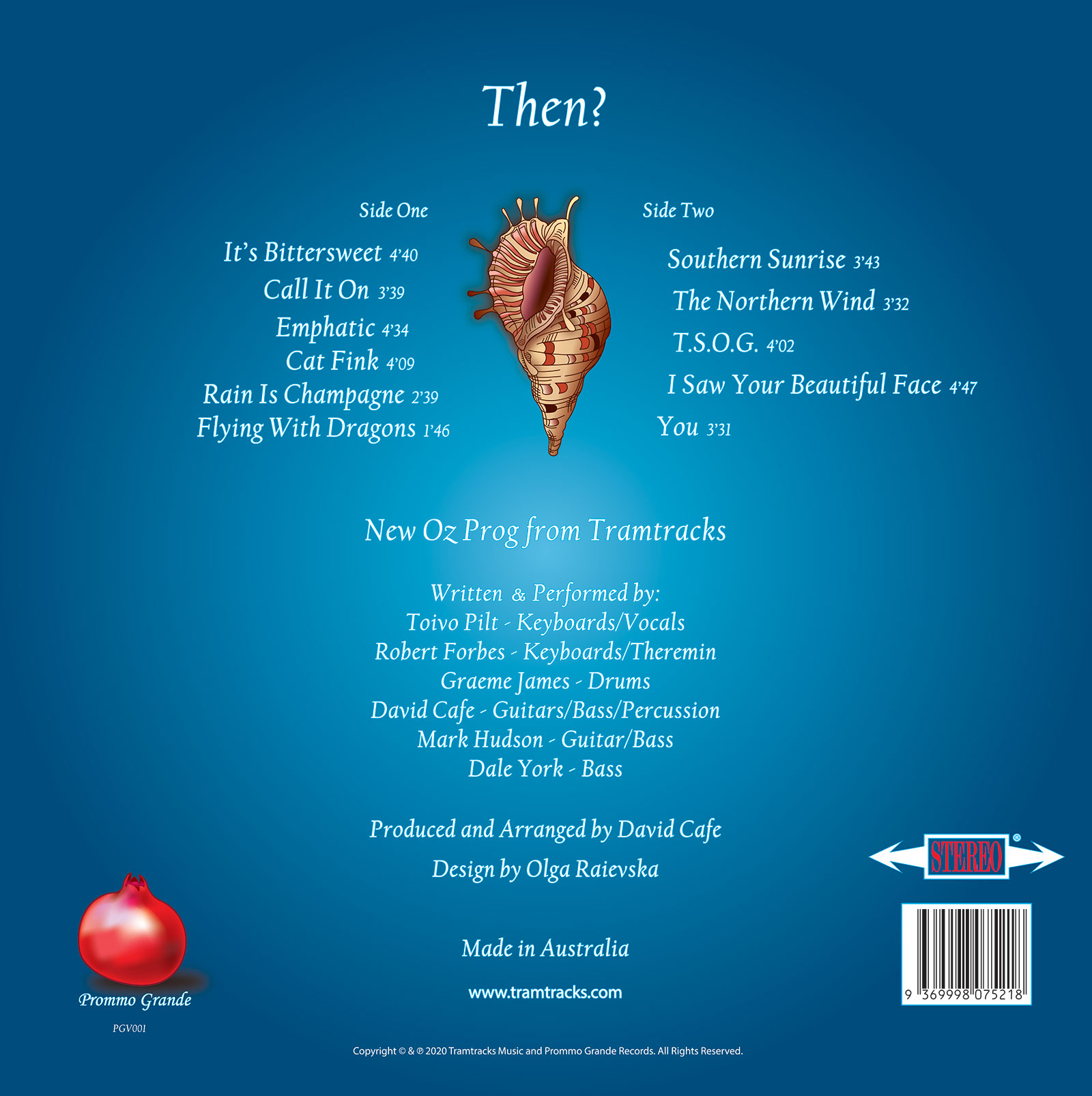 The release of vinyl album Then? from Australian band, Tramtracks heralds a newcomer to the prog world. Then? is an album that immediately sounds emotionally mature as it gently builds in intensity as it asks to ‘take the front seat’. Listening to Then? is more akin to an immersion into Tramtracks lush sweeping melodies as they propel forward with their infectious rhythmic pulse. There is an intensity to these simple melodies that draw the listener into their strength and subtle beauty. In a disrupted, chaotic world, Tramtracks Then? evokes feelings of warmth and harmony.

Tramtracks Then? is nothing like the old prog bands Yes, Genesis, Jethro Tull, or the Moody Blues but the sounds and instrumentation are unmistakably prog with big-sounding melodies brought to life by modern-day versions of keyboards like mellotrons, synths, organs; and touches of theremin over some sparingly beautiful guitar.

The hallmark of prog is usually a flurry of notes, extended length tunes and unusual time signatures. However, Then? stands apart from these early influences while still sounding decidedly prog as it breaks the rules with conventional songwriting, and yet it is not caught in the contemporary prog-metal scene either.

The tunes are short, catchy, melodic, rhythmic often guided by the gentle hands of keyboardist Toivo Pilt who doubles as a vocalist. You can hear his restrained touch on the keys. He shows us how to play the organ the way Steve Winwood, Billy Preston or Richard Wright might have done. His synth lines are rapturous as they add colour and texture, and his use of piano is more Donald Fagan than Rick Wakeman. Less is so much more as his piano lines shape the melody of a tune.

Meanwhile, Robert Forbes adds texture and colour with the Memotron, occasional theremin and other keys while the rhythm section pulses away with Dale York on bass, Graeme James on drums and Mark Hudson on guitar. Tramtracks, brought together and made possible by Forbes, is a studio rather than a touring band, yet rather incredibly, none of the tracks on Then? were composed. Rather, the band got into the studio and recorded what inspired them on the night which adds to the spontaneity of the album. After jamming together one night a week over many years, there was a kind of psychic communication that just developed between band members who learned to complement each others abilities and strengths. As a band, they shunned conventional ideas about composition, performed extended jams over no more than three chords, simply focussing on crafting a catchy melody. For example, Forbes might start something, Pilt would develop it further, and James would change it rhythmically so that contrast emerged. This means each tune was a ‘one-off’, never to be repeated performance that was captured in the studio. As part of further development of these jams, Forbes often initially selected those tunes earmarked for the Tramtracks treatment. They were subsequently reverse engineered into a song by Forbes and Pilt, with vocals and other instruments added to complete the tunes. Now that is prog!

Elevating them to another level again for this special vinyl release is David Cafe who took the original jams, added further guitar, bass and percussion as a special guest. Pilt also re-recorded some keyboard and vocal parts, then Cafe, with Pilt by his side, produced and mastered the album into a cohesive whole.

Toivo and David have been friends for over 40 years. Together, they started out in the original vinyl era, saw in the digital age, and have returned to their roots with the vinyl album Then? If anyone knows how to make a vinyl album, it is David Cafe having worked with the who’s who of Australian bands.

The Tracks
Rising out of swirling synths, side A opens with the punchy Bittersweet with a big full sound, lush keys over a prog rhythm with lashes of guitar to punctuate the sound. Then another rocker, Call It On, with its relentless feel textured by Pilt’s delicate piano.

With so many rhythmic changes, Emphatic became a stunning jam. Here is has been recrafted into an anthem for revisiting the regrets of our past and finding a new way. The restrained synth lines give way to electric piano and a delicate interplay between snare and toms before collapsing the time into a toe-tapping bass riff, big guitar chords and a driving beat. This is anything but ‘a tired old tune’!

Like so many of Tramtracks’ tunes, Cat Fink started as improvisation and turns into a rich lush prog extravaganza of Hammond and synths sitting snuggly over York’s bass lines and the big drum sounds from Ticker.

The Rain is Champaign is a vivid reminder of a country in drought and its thirst for water in this arid land. This busy six-eight rocker finishes with ‘the farmer’s in a seaplane’ as it soars into flight. Side A closes with excerpts from another jam, Flying With Dragons, with a pretty piano melody layered over a driving guitar, theremin, synths, bass and drum rhythm section.

Side B changes the mood. Sometimes it is the simplest of melodies that are the prettiest, and so it is with Southern Sunrise which again showcases Pilt’s delicate touch with composition and melody. The tune almost floats as it subtly builds in dynamics with delicate touches of flute, synth, organ over a rhythm section that gently propels the track forward towards its synth climax. Lyrically too it is evocative of Pilt’s life and relationship with Olga Raievska (aka CatFink!), wife and designer of the cover art for Then?.

The Northern Wind has also been reimagined with catchy rhythm section reminiscent of Little Feet. What is noticeable is that these tunes now have space and depth that wasn’t necessarily captured in their earlier offerings.

What is unexpected is the turn taken by the next three tracks. T.S.O.G (The Sound of Glebe) features Ralph White on trumpet and saxophone. It is a sublime start offset by Pilt’s stirring synth solo before White again gives a lesson in smooth sax as it should be, layered in the textures of Pilt and Forbes keys.

Perhaps the standout track of the album is the spacey and achingly beautiful I Saw Your Beautiful Face, a track about loss and the wonder of rebirth. The melody works its way through several different feels and rhythmic changes before climaxing in a soaring guitar solo from Cafe that builds on Hudson’s original lines.

If Southern Sunrise and CatFink show that prog can also be romantic, in a fitting end to the album, You takes an acoustic turn before being given the Tramtracks treatment as it celebrates the rediscovery of relationship, that touchingly finished in a wedding in real life between Forbes and Saunders who adds vocal accompaniments to the track!

Take a trip with Tramtracks Then? vinyl album.

You will want to take the journey again and again as this is no ordinary collection of tunes. Purchasers of the vinyl album also receive a free bonus digital download with details inside the album cover.

Want to join the discussion?
Feel free to contribute!